Bren Enterprises offer video and film production services on a freelance basis. The service includes live productions for internet along with tailored video for marketing needs. Having worked on numerous large-scale Film and TV productions, we are in a unique position to offer a full body of services to get any production from page to screen.

We pride ourselves on delivering high quality video (HD to UHD and 4K) at a reasonable price and in a quick and efficient manner.  We understand that video is the new go-to for companies that want to ensure that their customer base know exactly what their company is all about.

Gone are the days where a person will trawl through pages of text on an internet site looking for information. A short video delivers key information while providing a visual representation of the company.


We offer an affordable live streaming and video service. Live streaming is great for launches, conferences and to give your customer that extra personal touch with Q&A's or a tour of your business. 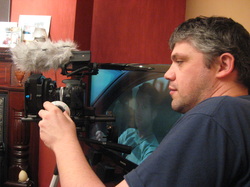 I have written several plays, short films and published a book, Order of the Dragon- Question of Time. I have had stage plays produced by What’s on Tom? Productions, Kilkenny, including ‘The Land’-premiered at the Watergate Theatre, Kilkenny. 33 was part of the 2015 Scene + Heard program in Smock Alley Theatre Dublin.

I have also directed The Duel, finalist at Offline Film Festival 2012, Masterpiece, and more recently The Rosen Bridge, supported by Kildare Arts (Coco), finalist in Borgus Films Influence Hitchcock competition, The Painter and Dandy VS The Hammer.


In 2013 I was part of a team of writers working with Kildare County Council, Tim Palmer, David Keating and Ferdia MacAnna in the creation of a new feature film, All About Eva. I was 1AD on the feature. I have also worked on The Vikings, Mrs Brown Boy’s D’movie, Damo and Ivor and Dare to Be Wild.